Which men’s college basketball prospects rose up and fell down the rankings? – NBA WEB
Skip to content
NBA

Which men’s college basketball prospects rose up and fell down the rankings?

Men’s college basketball recruiting hasn’t stopped despite the COVID-19 pandemic and the NCAA’s recruiting dead period being in place since March 2020.

The ESPN 100 (Class of 2021), ESPN 60 (Class of 2022) and ESPN 25 (Class of 2023) have been updated following the high school season, meaning some prospects rose considerably up the rankings for their respective classes.

As with any list, that also means there will be players who fell down the rankings, which can often be misunderstood. Many players who fall down the rankings are still elite but were simply overtaken in a highly competitive space. When a player rises up a board, he must sustain that high level of dedication and work to rise their talent even further. When a prospect drops, it’s only temporary if he handles the feedback constructively.

Here are 10 players who rose up the rankings, fell slightly or developed their games to increase their stocks and make their debuts into the rankings.

Who rose up the rankings?

Washington made progress all season long. He possesses a natural feel for tor the game and has a strong scoring prowess. He can create his own shots and also has the confidence to spot up from his teammate’s penetration or cut off a screen for a layup.

He also has a niche of knowing when to distribute the ball to a teammate and when to be aggressive and put the ball in his own hands.

As a shot creator, defender or a playmaker in general, Washington is resilient in leading his team in crunch time and is focused on making the right play. His productivity level is impressive and his potential is starting to blossom. He recently put out a final list of six schools: Arizona, Baylor, Kansas Kentucky, LSU and Oregon.

Bates approaches the game with a businesslike mindset and plays with constant effort. His frame is long and lean, and he displays vertical ability with lateral foot speed and positional length.

The Hoosiers commit is best at driving, finishing and defending. Throughout the course of his senior season, he has made noticeable growth with his outside shot. His overall evolution on both ends of the court is evident. Bates knows to slow down on offense and read the floor, as he will utilize a shot fake versus an out of control defender, but he continues to play fast and aggressive on defense.

His assertive mindset on defense aids in swiping at the ball and getting deflections and steals as he can defend most on the perimeter. The left-handed Bates makes winning plays and competes with a team first attitude.

Anytime someone cracks the top 10, it means he made significant improvement. Competition is stiffest at the top, and George proved he can be there.

Scoring comes easy to George, whether it is a long 3-point shot or his highly productive middle game. He is often the main target for opposing defenders, but he still effectively produces points within the flow of a possession against a half-court defense. His body control and drive game also mean he can draw fouls, and in turn, he can hit his free throws.

George is smooth, graceful and balanced with his movements. He does not take many contested shots, but he has the giftedness to make a challenged shot, a sign of next-level ability. His overall defensive effort must match his offensive effort to take another step in his development, but he has shown the ability to take a charge.

Who fell down the rankings? 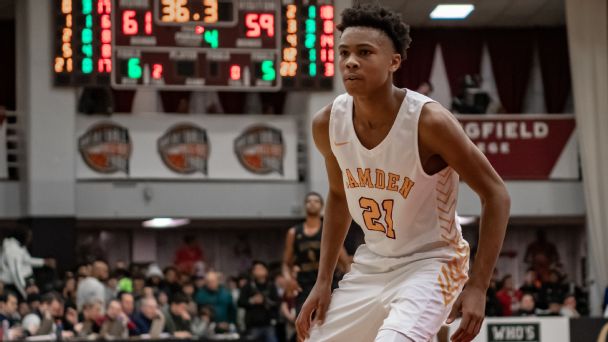 Warley remains an excellent long-term prospect, but Seminole fans may need to temper their expectations initially. He has excellent positional size, the versatility to play multiple positions and playmaking ability in open space, but he’s not yet as consistent going through contact, so the physical adjustment to the next level, especially in a conference like the ACC, may take some time.

Give his body and game a year or two to catch-up to his natural tools though, and he has a wealth of upside, both at Florida State and potentially beyond as well.

At a young age, Griggs has been a prolific scorer and is a talented scoring point guard with deep range, a middle game and finishing ability in the open floor. His handle is low, tight and compact with a burst that gets him where he want to go.

Griggs shows an array of shots with clever movements and with straight line drive ability as resourceful scorer. Heading into the offseason, he needs to become an everyday player on both ends of the floor and improve his level of conditioning. That said, the Class of 2022 prospect has plenty of time to make those adjustments, and he has the capability to make that happen.

Huntley-Hatfield, from Clarksville, Tennessee, is loaded with tools. He’s long and strong with a broad build, versatility to play inside and out, good hands, dexterity, a passing instinct and a quick second jump. But he may require a little more patience than he would have a year from now.

What he hasn’t done quite yet is learn how to put those tools together on a consistent basis so his production can match his potential. Current Vols coach Rick Barnes has a long history of helping talented freshmen do just that, from Kevin Durant to Michael Beasley to Keon Johnson, so monitoring Huntley-Hatfield’s maturation next year should be both fun for college basketball fans and a subject of particular importance for NBA scouts.

New to the ESPN 100, Nembhard is a throwback-style true point guard who ran the show for the top high school team in the country this year, Montverde Academy in Florida.

The younger brother of Gonzaga guard Andrew Nembhard, Ryan doesn’t have his brother’s size (6-5, 193 pounds) at the position, so there have been some questions about his long-term upside. But what has been undeniable each time he took the floor was his maturity and composure.

His experience and proven ability to manage a high-level game make the Ontario native uniquely suited to step in and make an immediate contribution at the next level, which is going to be important for Creighton next season following Marcus Zegarowski’s decision to declare for the draft.

The Baltimore native is a big-bodied wing and versatile volume scorer from IMG Academy’s post-grad team who is also debuting in the ESPN national rankings.

Murray is headed to LSU next year best suited to make immediate contributions in the scoring column in a class that also includes Jerrell Colbert and Bradley Ezewiro.

Other notable names who are new to the ESPN 100 include SG C.J. Noland (Oklahoma) and SG Shane Dezonie (Arizona).

The most notable new name in the ESPN 60 is Knox, who recently made an early pledge to Memphis. Knox is a wiry playmaking guard with an aggressive style, shifty handle and creative finishing package. He has come on strong in recent months and is someone who should have more focus on him against national-caliber competition this summer.

Ward is another player in the Class of 2022 who is worth more attention. He played a leading role for legendary program DeMatha Catholic this winter and has already seen his recruitment begin to rise to the highest levels. He’s a big wing loaded with obvious talent, but has also started to turn his potential into production on a more frequent basis.

In the Barclays Center, the Brooklyn Nets have just won 106-111 over the Pacers. Brook Lopez scores more of twenty points for the Nets. #NBA

This was the 400th victory of Van Gundy as a Detroit's coach.

Yesterday, Warriors defeat to Cavaliers, who played without LeBron. 94-112 to Golden State. #NBA

"On the the road you really gotta lock in and come together."

@KevinHuerter talks about he and the @ATLHawks having success away from home in the #NBAPlayoffs.

The @Suns win Game 1 and the @ATLHawks win Game 7 and advance in Sunday's #NBAPlayoffs action!

Clint Capela on the @ATLHawks chemistry and positive team mentality to just have fun and compete.

Trae Young on Kevin Huerter (#NBAPlayoffs career-high 27 PTS in Game 7) elevating his game, being more aggressive and looking to score.

"We've been at it since the beginning."

@TheTraeYoung on the support his dad has given him over the years and what it meant to win Game 7 in front of him on Father's Day. #ThatsGame